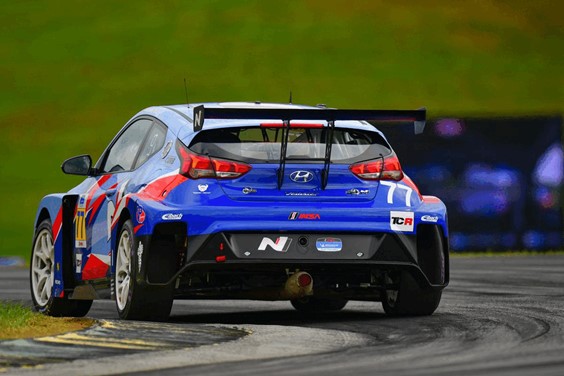 TCR Championship Ahead for Taylor Hagler at Road Atlanta

With making history on the line, Taylor Hagler is primed for the IMSA Michelin Pilot Challenge season finale at Michelin Raceway Road Atlanta. The Fox Factory 120 stands between her and the TCR Championship aboard the No. 77 Bryan Herta Autosport Hyundai Veloster N TCR on Friday, November 12th (1:00pm ET, TrackPass on NBC Sports Gold).

Hagler has shined through the 2021 season with consistent results. Her TCR Championship campaign began at the first round at Daytona International Speedway with a fourth-place finish. Since then Hagler has collected eight top-five finishes including four podium results and her inaugural IMSA win at Lime Rock Park.

The Hyundai driver arrives at Road Atlanta leading the TCR Championship leaderboard by 230 points. Hagler will clinch the title by starting the 120-minute race and become the first female IMPC champion. She will also join the ranks of Christina Nielsen as the second woman to win an IMSA sanctioned championship.

Road Atlanta is a place of significance for the 26-year-old as it was the site of her first test in TCR machinery in 2019. Hagler also secured two top-five finishes last season.

“The end of the season is bittersweet but also an exciting time,” said Hagler. “The entire Bryan Herta Autosport team, Michael (Lewis) and I have worked hard for months on end to get to this moment. We still have a race ahead that is our first goal of the weekend. Road Atlanta has always been good to me and such a fun track to drive so I am looking forward to getting on track.”

The Fox Factory brings the IMPC season to a close on Friday, November 12th. Live flag-to-flag coverage can be found on TrackPass on NBC Sports Gold beginning at 1:00pm ET.