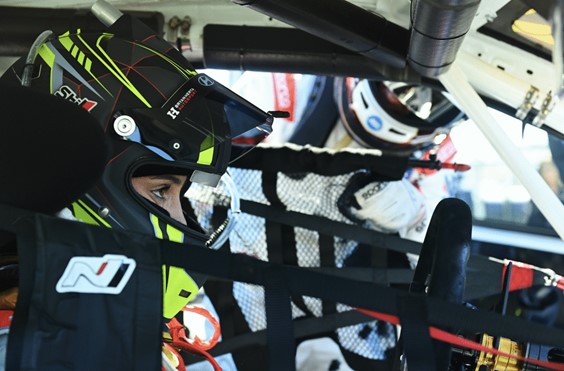 With two races remaining in the 2021 IMSA Michelin Pilot Challenge (IMPC) season, Taylor Hagler looks to check off VIRginia International Raceway on her way to the TCR championship. Hagler and the No. 77 Bryan Herta Autosport Hyundai Veloster N TCR will be featured in the marquee race of the IMSA weekend on Sunday, October 10th (2:00 PM ET, TrackPass on NBC Sports Gold).

Alongside teammate Michael Lewis, the Hyundai driver will make her sixth race start at the rural Virginia track as she looks to write history. The 26-year-old Texan is on track to claim the TCR Driver and Team Championship for BHA. If Hagler accomplishes the feat, she will become the first female to win an IMPC championship and the second to ever win an IMSA sanctioned championship. Hagler currently holds a 170 point lead heading into the penultimate round at VIR.

On her way to leading the championship standings, Hagler has been a model of consistency each outing this season. She and Lewis have combined to claim seven top-five finishes including five podium appearances and a class win at Lime Rock Park.

With her eyes ahead, Hagler looks for success at VIR.

“This is a race I have been looking forward to all year,” said Hagler. “The Veloster has performed well there in the past and I am excited to see what Michael (Lewis) and I can do.  The goal is the same that we have had all year, keep the car in a good position and be there to fight at the end.  It feels like a big Lime Rock to me and we won there, so I am feeling good!

On-track action for the Virginia is for Lovers Grand Prix begins Friday, October 8th with the marquee event on Sunday, October 10th. Live streaming of flag-to-flag coverage will be available on TrackPass on NBC Sports Gold beginning at 2:00 PM ET.