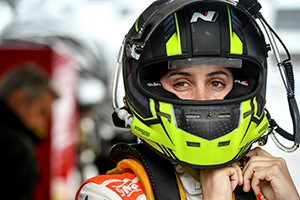 Taylor Hagler qualified the No. 1 Hyundai Elantra N TCR in fifth for Thursday’s Alan Jay Automotive Network 120 at Sebring International Raceway. Hagler brings a strong wave of momentum with her following her run to the podium in the IMSA Michelin Pilot Challenge season opener at Daytona in January.

Hagler was set to make her second qualifying run onboard her new Hyundai Elantra having previously raced to the 2021 IMSA championship onboard the Hyundai Veloster N TCR with Bryan Herta Autosport.

With the Michelins usually generating the optimal qualifying window on lap three and four, Hagler was right on pace to set her fastest time of the weekend. Despite encountering traffic on her hot lap, Hagler posted 2:15.478-seconds on Lap 4 which put her fifth in the order for Thursday’s two hour main event.

Hagler has netted podium finishes in three of her four race starts at Sebring and is looking to add to that strong record of success at the central Florida circuit.

“I’m frustrated that I got traffic on what would have been the best lap for the tires, but overall this is a good place to start tomorrow,” said Hagler. “We made a few little changes after the last practice, so the car was better even though the temperatures had gone up a lot. The team did an awesome job and hopefully we can keep the momentum we have going with the Hyundai Elantra from the podium at Daytona tomorrow.”

The Alan Jay Automotive Network 120 at Sebring International Raceway is set for a green flag start at 4:25pm ET with live coverage on Peacock.