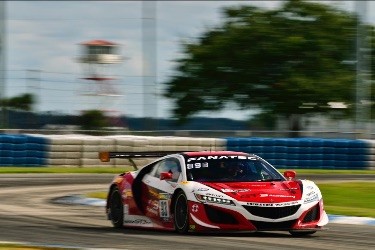 A charge to the top of the running order was in order after Hagler and the No. 93 Racers Edge Motorsports Acura NSX GT3 were slotted in the eighth starting spot.

The opening green flag shuffle saw Hagler begin another thrilling drive through the field similar to her recent races. By lap 12, she was fifth overall and second in class, 5.5-seconds behind the leader. When she made her mandatory pit stop eight laps later, she was just 1.483-seconds out of the lead.

Dickerson took over in fourth overall and second in class, 2.152-seconds in arrears. He caught veteran leader Jan Heylen with 15 laps remaining and closed to within one second. Over the final 10 minutes, the cars running second, third and fourth overall were nose-to-tail.  Running fourth, Dickerson made repeated moves on Heylen. With two laps left, he charged alongside the second-place car in the hairpin, but could not make the turn due to contact and fell back in line. Dickerson brought the No. 93 Racers Edge Motorsports Acura NSX GT3 Evo across the line claiming the second step on the Pro-Am podium just 0.963-seconds behind the class winner. and fourth overall.

“It is nice to get back up on the podium with Dakota here at Sebring,” said Hagler. “We came ready to battle and we gave the Wright Motorsports guys one of the better fights we have had all season!  I made a mistake on the start and put us behind, but I put my head down and picked cars off one by one.  Dakota put in a stellar drive to fight for the top step of the podium, but we ended up second today.  Thanks to the Racers Edge Motorsports crew for a car that was the class of the field today.  We are going for it tomorrow!”

Dickerson qualified second in Pro-Am for Sunday’s final race, set to start at 1:15 p.m. ET. Live flag-to-flag coverage will be available at YouTube.com/GTWorld.