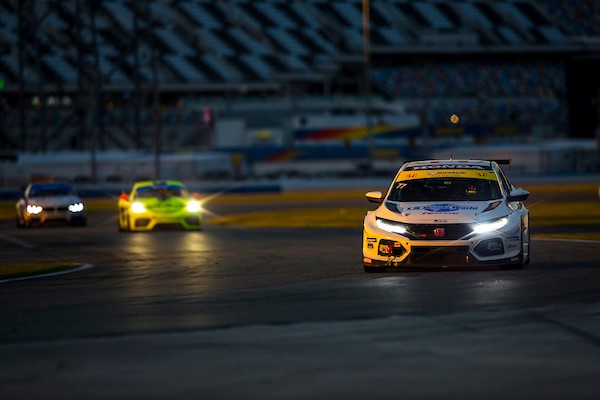 Having made significant progress in her first weekend at Daytona International Speedway earlier this month, young HPD driver Taylor Hagler is looking forward to returning to the track for the season-opening IMSA Michelin Pilot Challenge (IMPC) race this Friday. Hagler will share the driving duties on board the No. 77 Civic Type R TCR alongside her L.A. Honda World teammate Ryan Eversley for the four hour season opening event set at the “World Center of Racing” (NBC TrackPass 1:00pm ET, January 24th).

Making her debut at and amongst the highly competitive IMPC field just three weeks ago, Hagler checked a lot of ‘first time’ boxes off during the Roar Before the 24 test weekend.

Hagler learned the 3.56-mile road course layout, which features a fast mix of 12 turns and sections that run on the 31 degrees of Daytona banking as she got up to speed in her first run on board the Michelin-shod Honda TCR machine.  Quick to learn an all new car, team, series and track, the 24-year-old is taking lessons learned from her developmental Daytona test and is ready to apply it to the first IMSA event

“I am expecting it to be a good race weekend,” said Hagler. “My lap times were consistent during the test, and I’m getting better each time I get in the car. It gives me confidence that I will be able to continue that trend into the race. Getting to drive with L.A. HondaWorld has been great as well. They are an established team in the series and have proven results in IMSA. It definitely gives me a boost of confidence to be racing under their banner. My teammate Ryan (Eversley) knows Daytona like the back of his hand and has been a great resource for me to learn as much as possible. I am looking forward to getting in race traffic for the first time this year and seeing the competition in a race setting.”

The BMW Endurance Challenge at Daytona is set to go green on Friday, January 24th with live streaming available on TrackPass through the NBC Gold app beginning at 12:50PM ET.