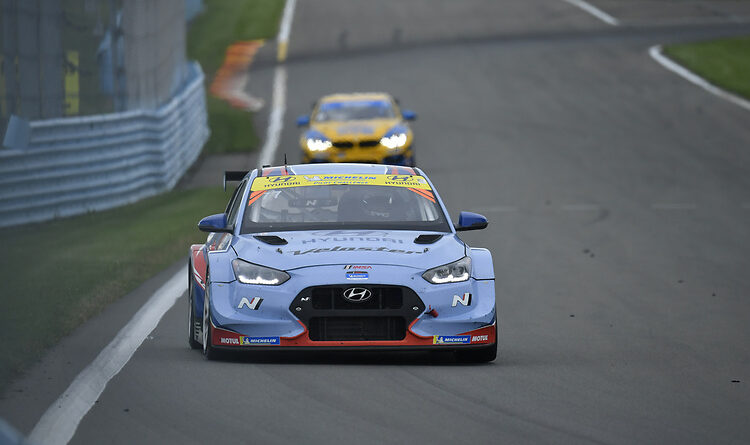 Racing back-to-back weekends at Watkins Glen International in up-state New York, round two looked to be one for the record books for the Elantra entries as they ran first and second with Gottsacker in the #33 Elantra leading Chase in the #98 through most of the first half of the race. It wasn’t meant to be.

Gottsacker’s domination of the race was abruptly halted when he reported a popping noise, forcing an early pitstop. In short order, the #33 crew diagnosed and remedied what turned out to be a fuel issue. While the #33 Elantra was able to finish the race, the additional stops resulted in a 10th place finish.

Parker Chase teamed with 2020 champion Gabby Chaves this weekend as his full-time teammate, Ryan Norman made his IndyCar debut. Chase had another fantastic performance in the #98 Elantra N TCR, his third consecutive event racing inside the top-three. He challenged his teammate Gottsacker form third position the first 15 laps and then raced hard for the lead for 11 laps before coming to the pits for a driver change.

As Chase approached his pit box, the Toyota Supra in the neighboring pit box was released into Chase’s lane and narrowly missed the #98 Elantra N TCR. In effort to avoid contact, Chase was forced to stop beyond his pit box, too far for the fueling apparatus to engage. Rules prevent cars from using reverse in the pitlane and the #98 crew frantically pushed Chase back to his service area while Chaves anxiously stood by in the pitlane to execute the driver change and take over the cockpit for the remainder of the race. They continued in the race, but similar to the #33 team, the lengthy pitstop pushed the #98 from second to eighth position.

Taylor Hagler and Michael Lewis had a challenging, but ultimately rewarding pair of races at The Glen. Early contact forced them to battle their way from the back of the pack in the four-hour race, yet they got the job done and scored their third consecutive podium when they finished third at the first race at The Glen.   They were forced to do it all over again one week later at The Glen when they had fuel issues during qualifying and were not able to record a time. The consequences of starting in the back were bigger in the two-hour race with less time to work their way through the field. They prevailed, Taylor Hagler put in a strong performance, she worked her way up from 15th to eighth before turning the #77 Veloster N TCR over to her teammate Michael Lewis. Lewis once again, raced flawlessly into the top-five, however the duo thought their podium streak had ended with their fifth-place finish. Not so fast!  The second and third place finishing cars failed post-race inspections for being underweight. This elevated Hagler and Lewis to third place, their fourth consecutive podium result and pushed them back strongly into the championship points lead!

Michael Johnson, co-driver of the #54 Hyundai Veloster N TCR scored his best qualifying result of the season. While he and teammate Stephen Simpson were not in contention for victory this weekend, they scored another top five finish and strengthened their championship position. They are ranked fifth, just 40 points behind fourth.

Bryan Herta Autosport returns to their Speedway, Indiana workshop after two weeks on the road, to prepare for he second half of the IMPC season. The Hyundai’s return to competition in two weeks at Lime Rock Park, in Lakeville, CT.